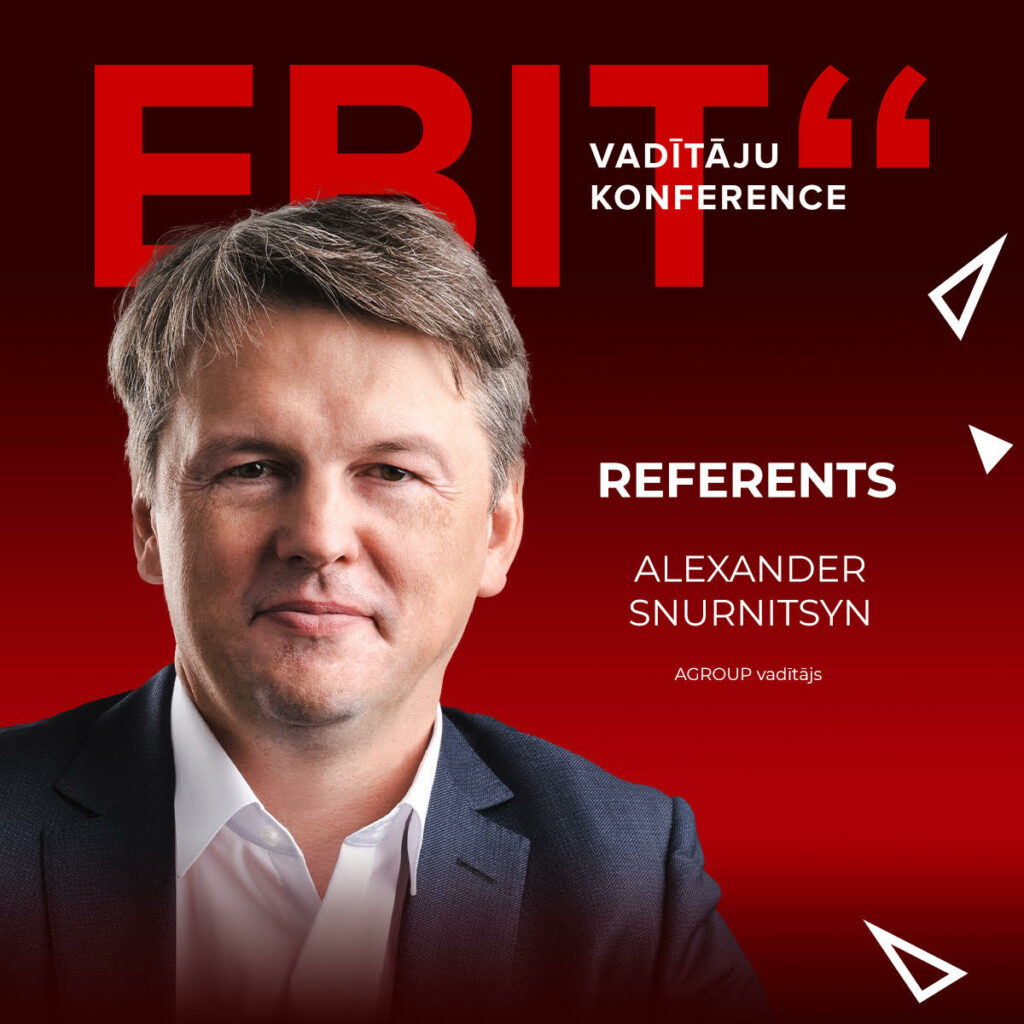 The executive conference Vadītāju konference EBIT 2022 hosted by ATTA CENTRE exceeded AGroup expectations. It was invigorating, both intellectually and emotionally and it provided a wealth of practical strategies & insights. The host Valdis Melderis was terrifically energetic & charismatic.

AGroup CEO Alexander Snurnitsyn has shared provocative views on what we all tend to treat as a Good, and even as a blessing & that’s the development of IT, but if it’s not?

If it’s one of unavoidable forces getting us closer to the end of human civilisation? And it’s based purely on Physics laws, namely on the 2nd law of Thermodynamics.

When by & large all our basic needs are satisfied & we’ve got almost equal access to them reaching, so called, equilibrium where there is no free energy as it’s evenly spread comes “heat death”.

It’s all applicable to CLOSED systems only. Well, EXTERNAL forces are able to save the situation. What or who will be they?

Alexander Osterwalder, the inventor of Business Model Canvas, challenged our assumption about the approach to innovation saying that by failing fast and adjusting, leaders reduce uncertainty and can feel more confident investing in new ideas.

Randi Zuckerberg, the founder, and CEO of Zuckerberg Media, who is a real stellar empowered us by her life story, as well as by the unique customization possibilities of WEB 3.0 and by the handy advice on a well-balanced life.

Michio Kaku, Ph.D. , the world’s most influential physicist articulated mind-expanding and illuminating insights about the future, and one of them is the ‘Brain-net’ through which we’ll send emotions & feelings.

Alexander Bard, a Swedish cyberphilosopher, sociologist, the owner of one of the largest Internet companies in Sweden, a musician, and the member of “Army of Lovers” project is an outstanding mind-opener! He challenged thought-provoking views on IT & paradigmatics.

Pierre Casse, Professor and Dean at Berlin School of Creative Leadership and Owner, Business Innovation Network articulated well-researched and thought-out ideas regarding singularity time and leading ourselves, but the most important is to perform & enjoy.

Baiba Braze, Assistant Secretary General at NATO, reinforced us in our aspirations to be mature-minded and act well-coordinatedly.

TIKHON DZYADKO Dzaydko, the editor-in-chief of the Russian independent TV channel ДОЖДЬ which has recently moved to Riga emphasized the importance of independent media and promised to go further.
Girts Ruda, Board Member at the Financial and Capital Market Commission absolutely grabbed our attention with his presentation ironically entitled as an appeal to the Latvians to become civil servants (‘Latvji, stājietes valsts darbiņā!’).

Juris Zagars, being Dailes Theater Director & an actor emphasized that one of the greatest talents is an ability to make people LIKE you and only then you can sort out any issues.

During a panel discussion moderated by a well-known journalist Janis Domburs on the current political & economic situation, critically vital thoughts were expressed by the participants — Andris Strazds, Adviser to the Council at Latvijas Banka, Andris Piebalgs, Prof. at the European Univerisity Institute & the former EU Commissioner for Energy and Development, Una Aleksandra Bērziņa-Čerenkova, the Head of the Riga Stradins University Political Science; Director at RSU China Studies Centre.

Daiga Auziņa-Melalksne, the Head of Nasdaq Baltic markets, CEO Nasdaq Riga, Associate Vice President, reminded once again how it’s important to be persistent in your endeavors and keep going while being determined and committed to your business & all it she showed on a simple example of swimming exercises.

Santa Zalyalova, Co-Founder & CEO of HealthTechPro spoke openly that she used to be a difficult teenager & was struggling with dyslexia, dysgraphia & dyscalculia, but managed to become the one who implements innovations in HealthTech & one of the best in applied shooting in Latvia.

Jitske Kramer, a Corporate Anthropologist believes that people shape cultures & cultures, shape people. Emotional ‘campfire’ interaction is the power, not hierarchal structures.Lauris Aleksejevs, the executive chef of the restaurant ’36. Līnija’ after the insight into his professional issues sang a song accompanying himself on the guitar – it was really sweet!

The panel discussion moderated by a leadership expert Olga Dzene, on gender issues in business approved once again that personal qualities matter much more than gender and all the participants unanimously agreed on that — Maksims Jegorovs, Accenture Baltics CEO; Antra Zalite, Visma Chairman of Board; Kristine Jarve, Managing Partner Baltics at Deloitte; Uldis Tatarcuks, CEO at TET.